The sea has always been a big part of my life. Although I have no memory of my first Atlantic crossing as a toddler on a banana boat, I still vividly remember my first crossing on the QE2 in 1975 at age seven. At that time my father, Ron Warwick, was the first officer. He would ultimately assume command of the QE2 himself, just as my grandfather Commodore ‘Bil’ Warwick had done before him. The Cunard Line has featured prominently throughout my own life and I have been fortunate to be able to sail on many of their vessels over the years.

In 1992 I sailed on a two-week Caribbean cruise on the Cunard Countess. One of the many tour excursions on offer in St Thomas was a dive in the Atlantis submarine. Although a keen swimmer since an early age, this was my first real glimpse of the underwater world. I enjoyed the diverse marine life in the clear blue waters, but what really caught my attention was the remains of a small wooden boat lying on the sandy seabed. Then to my amazement scuba divers appeared and proceeded to inspect the wreckage at close quarters. At that point I made an instant decision – I didn’t want to be among the noisy tourists crammed inside the submarine – I wanted to be a diver exploring the silent world outside. I wanted to see sunken shipwrecks for myself.

Within weeks of returning home to the UK I signed-up for a diving course with Newbury Sub-Aqua Club, a local branch of the British Sub-Aqua Club (BSAC). I completed my first open water dive the following March in cool waters off the Dorset coast. Just like my first voyage on the QE2, it is a memory that I can recall easily, and one which I will always treasure. I had been well and truly bitten by the scuba diving bug. 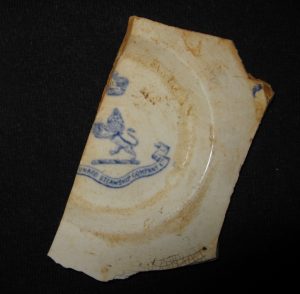 Cunard china from the wreck of the Aurania

Several years later, in June 1996, I found myself aboard the dive charter vessel Harry Slater on a club trip to the Sound of Mull. On the first day I was excited to learn that we would be diving on the wreck of the Aurania, a Cunard liner that ran aground off Mull after being torpedoed by UB 67 on 4 February 1918. Mid-way through the dive my buddy and I came across some shards of broken china, one of which was clearly marked
“Cunard Steamship Company Ltd”, along with the famous lion-rampant logo. I was holding Cunard Line history in my hands.

The immediate question that arose to me after the dive was “how many more Cunard wrecks can I dive on?”. This proved surprisingly difficult to answer, and which after many years of research ultimately led to writing Shipwrecks of the Cunard Line (2012) in collaboration with Mike Roussel. I have since had the pleasure of writing two further books with Mike; The Union-Castle Line – Sailing Like Clockwork (2015) and Shipwrecks of the P&O Line (2017). My most recent project marks a return to the Cunard Line as co-author with my father on the fourth edition of the acclaimed QE2 – The Cunard Line Flagship Queen Elizabeth 2 (2019).

Writing a blog is a new experience for me and it is too early to tell where it may lead. I hope this will become a platform for sharing stories, anecdotes and news based around maritime and diving themes.

Theme by Anders Noren — Up ↑